What is Symbian OS

Symbian is a mobile operating system (OS) and computing platform designed for smartphones and currently maintained by Nokia.The Symbian platform was created by merging and integrating software assets contributed by Nokia, NTT DoCoMo, Sony Ericsson and Symbian Ltd., including Symbian OS assets at its core, the S60 platform, and parts of the UIQ and MOAP(S) user interfaces.

In December 2008, Nokia bought Symbian Ltd., the company behind Symbian OS; consequently, Nokia became the major contributor to Symbian’s code, since it then possessed the development resources for both the Symbian OS core and the user interface. Since then Nokia has been maintaining its own code repository for the platform development, regularly releasing its development to the public repository.Symbian was intended to be developed by a community led by the Symbian Foundation, which was first announced in June 2008 and which officially launched in April 2009. Its objective was to publish the source code for the entire Symbian platform under the OSI- and FSF-approved Eclipse Public License (EPL). The code was published under EPL on 4 February 2010; Symbian Foundation reported this event to be the largest codebase transitioned to Open Source in history.

The All over Model contains the following layers, from top to bottom: 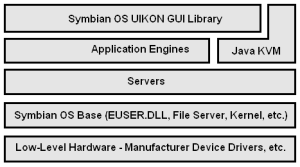