On A Tiger Trail

It took almost 1.5 years and three visits for me to finally pen down an article on Jungle Retreat. The first trip we made was in January 2016, where we encountered a tiger while on a trek, the next trip was in December 2016, again we were on the trek when we all heard a tiger growl almost 10 meters away from us. Out of all the Wildlife destinations I have been to in the past one year, Wayanad was the only one that guaranteed us some adventure, and Jungle Retreat always felt like home. And that is why we decided to visit it a third time. During the scorching summer to get away from the polluted Bangalore atmosphere, into the Jungles of Wayand.

It was an early Saturday Morning, we set out from our nest in Bangalore to  ‘The Jungle Retreat’. We had decided to leave early so that we could enter the of Nagarhole Wildlife reserve as soon as the gates open. My brother-in-law was behind the wheels.

We reached the Nagarhole gates by 8AM. In the next one hour we saw a myriad of birds and animals which included common hoppoes, Indian Rollers, Racquet tail drongos, A pair of wild dogs, Gaurs, barking  deer and spotted deer . I was frantically clicking photos as we passed by these (there was a strict instruction not to stop anywhere in the sanctuary). Spotting of the wild dogs was a pleasant surprise, because from one of my previous visits I had learned that these were a rare species to find.

We crossed the other end of Nagarhole within an hour and then we headed straight to Tirunelli temple. The idea was to have breakfast from one of the tea shops nearby. After having an authentic Kerala style breakfast in a Hotel with thatched roofs and shaky benches (The food was really delicious. I would recommend my readers to try one such place while in Kerala). We reached Jungle Retreat and there was the familiar face of Darshan and Manu to welcome us. They have been our hosts in our previous visits too. Mr. Anil the owner of the place was also there. We checked into our rooms and from the balcony I could see Anil heading out with a group for the customary Jungle Trek. 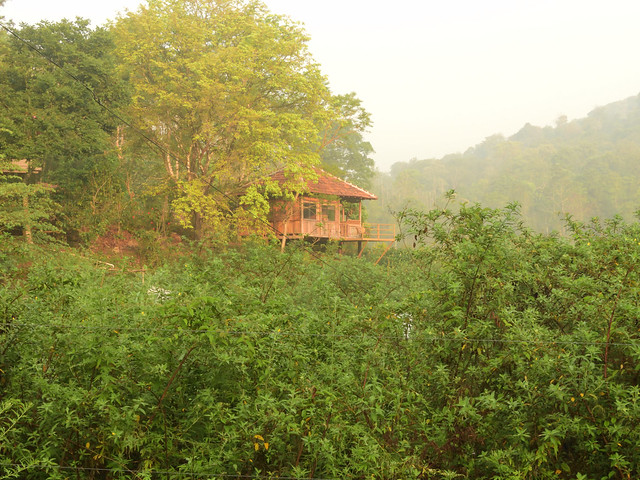 We quickly freshened up and took a stroll around the property. There was a large bird hovering over us, the distinct white under wing pattern was a definite give away that it was a crested serpent eagle. We had a JLR safari in Nagarhole scheduled for 3:30PM, we had our lunch, and took rest for almost half an hour. Then we started off for the safari. Mr. Santosh from JLR was waiting for us with his Jeep. There were other tourists also with us. I took one of the side seats with my camera ready. When you are in the jungle every moment you spend anticipating a miracle. You expect a tiger, a leopard or  even a herd of elephants to cross your road or atleast to appear somewhere in the distance. But in such anticipation people tend to ignore the smaller creatures, plants and flowers of the forest. Its a privilege to even hear the sounds of the jungle and one should be ready to enjoy that. Because on some trips that maybe all that you get.  We saw some shy barking deers and some curious sambar deers. 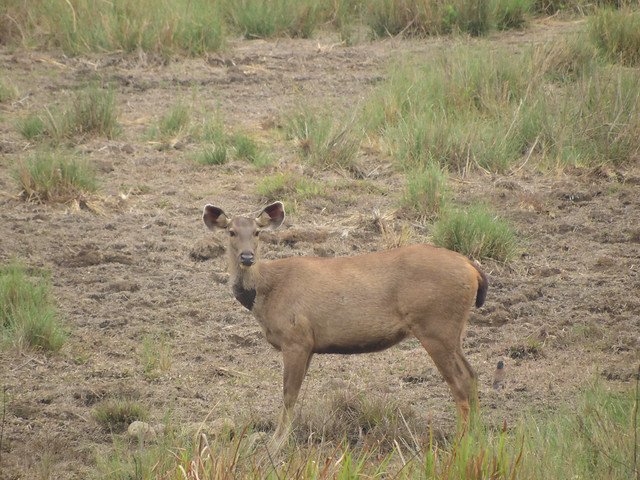 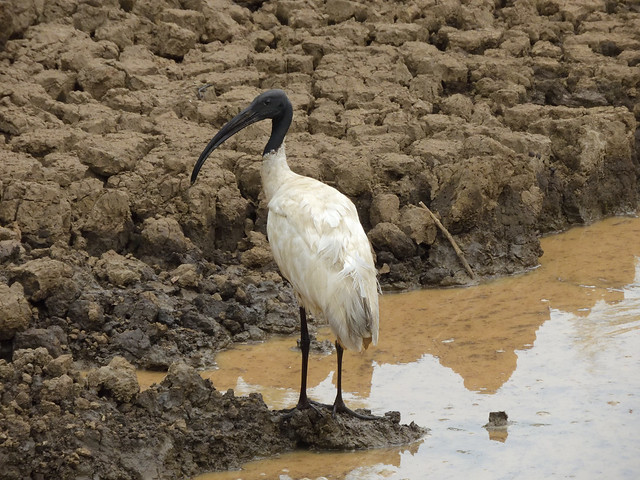 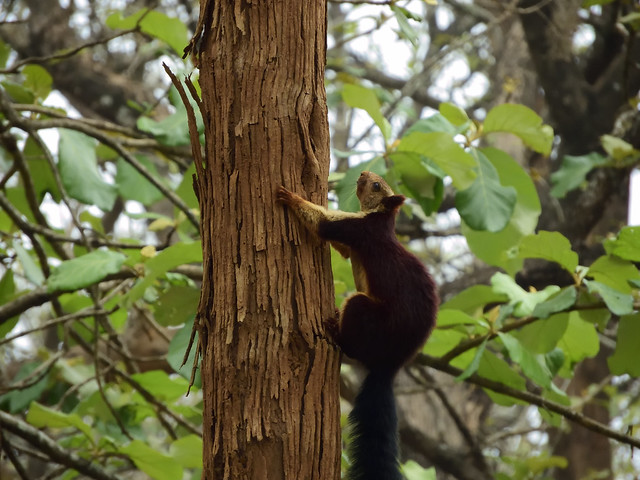 There were some guest appearances by 3 monitor lizards, a grey mongoose, couple of Malabar Giant squirrels, a lesser adjutant stork, peafowls and even a cobra. Mr. Santosh tried various corners of the Sanctuary to get some good sightings. 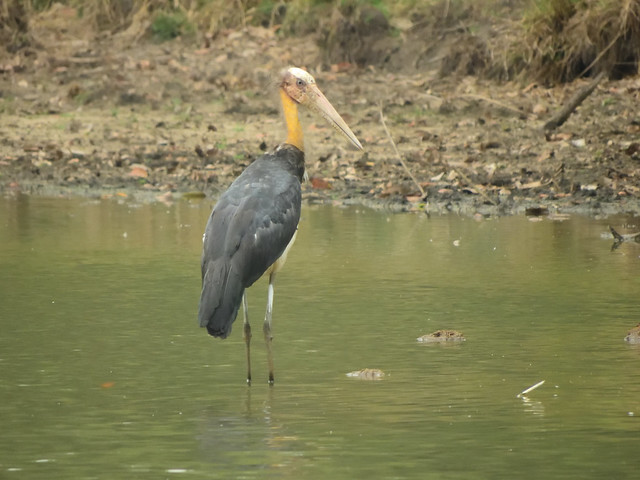 When you are out in the jungle, you tend to loose track of time, there is a never ending excitement. Who knows maybe at the next bend there maybe a tiger waiting, or maybe behind the bushes. And even after the safari ends the excitement lingers for some  time. Content with whatever we had seen we headed back to our room. We had the customary camp fire arranged for us, a little away from the Jungle Retreat property. We then headed straight for that. This time Mr. Anil was driving we all sat besides a stream, under a moonlit sky around a fire that was devouring every piece of log that was thrown into it. There was a pot of hot steaming soup above the fire. Everyone was chatting and sharing stories, while Chathettan a tribal guy who has been with the Jungle Retreat was busy cleaning  a stone and was grinding some chutney to accompany the soup and tapioca. Mr. Anil and Manu were sharing there experiences in the wild and it was so fascinating to hear those stories. On our way back the keen senses of Manu and Anil picked up on some barking deer calls. Anil was explaining that barking deer calls are the most reliable calls and that the reason at this moment can be nothing but the presence of a tiger. Everyone was alert and were straining there eyes in the dark to catch a glimpse of that tiger. But then we all had to return back knowing that we were very close to a tiger and although we had not seen it, It might have already seen us and might have decided that we were not worthy of its audience. After all it was the king of the Jungle in these areas. The next day early morning we got up and went for birding. Having been to the lakes in and around Bangalore for birding, it was a completely new feeling to go birding in the Jungle, I accompanied Manu and we found position on a rock near the property were we set base for the next one hour. We had a couple of visitors in that one hour. 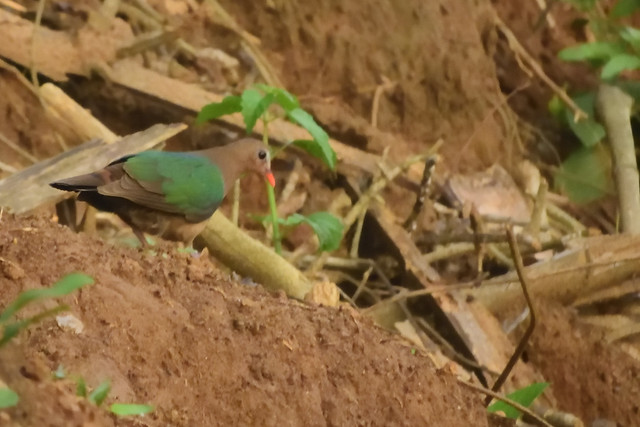 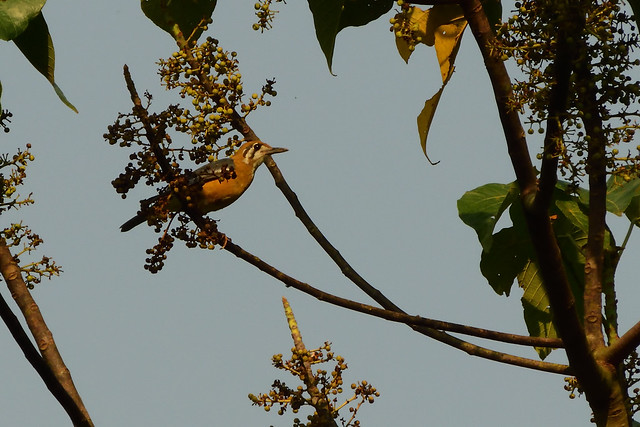 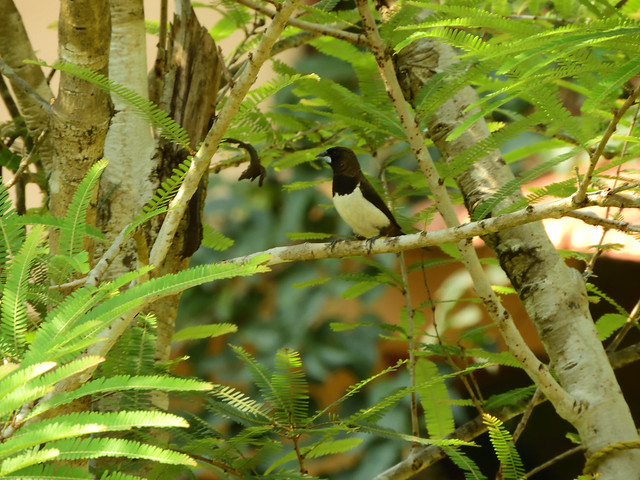 After this we had breakfast and were geared up for the jungle awareness trek. This was one single activity that we were all waiting for. Manu was our guide for the day. He took us on a different route this time, stopping at points to make sure that there are no elephants. We got the strong smell of elephants at certain locations. Almost half a kilometer had passed by when Manu saw a pug mark. He was explaining to us that it must be a couple of days old. He was going into the technicalities of how the age and sex of an animal is determined based on the pug marks. As we moved ahead there was a strong pungent smell and Manu confirmed that it can be nothing but a recent kill made by the tiger, we followed the scent and found the hoof of a spotted deer. The whole area was scattered with pug marks, thanks to recent rains in the region the ground was wet and muddy. The pubmarks were clearly visible even to the untrained eye. Manu even noticed that a leaf which had fallen inside one of the pug mark was folded and it was just beginning to unfold, his conclusion was that the tiger must have stepped on that leaf and if it still unfolding then the pug marks are not more than an hour old. Blood was still dripping out of the hoof piece that we saw, which meant that the tiger was still around with a half finished meal and we were entering its territory. Manu gave us a signal to turn back and we took a detour and hurried back in to the safety of the electric fence around the Jungle Retreat property. Thanks to the expertise of Manu once again we all returned back in one piece to tell the story of how close we went in disturbing a tiger that was having its meal.

In the second post in this series I will be taking my readers to Kasavanahalli Lake a beautiful but dwindling lake on the Sarjapur main road. This lake has been in the news for the wrong reasons. It has been a witness to encroachments by the land mafia on several occasions. On the boundary of the lake there is a drainage that flows by from the high rise apartments nearby. If you avoid these boundary areas the lake is mostly calm and looks unpolluted. Unlike the Kaikondrahalli lake there is lesser activity at Kasavanahalli lake and may be for the same reason you will be able to have a more fruitful birding session here.
The location marked on google maps is correct. From Sarjapur Main road take the road opposite to the big bazar and continue till you reach Ozone fern city. There will be a small mud road that leads to a cemetry and then a school gate. Go through the gate and you will reach the lake. 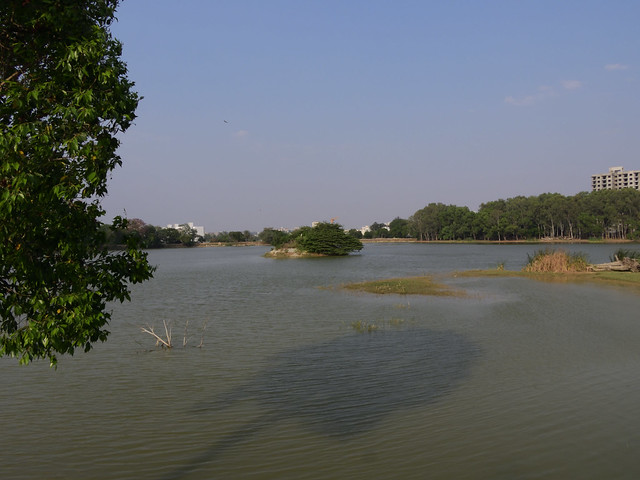 The lake has almost 2km of jogging track. It is not paved with tiles and there would be cattle on these tracks, but still its much better than the human crowd. 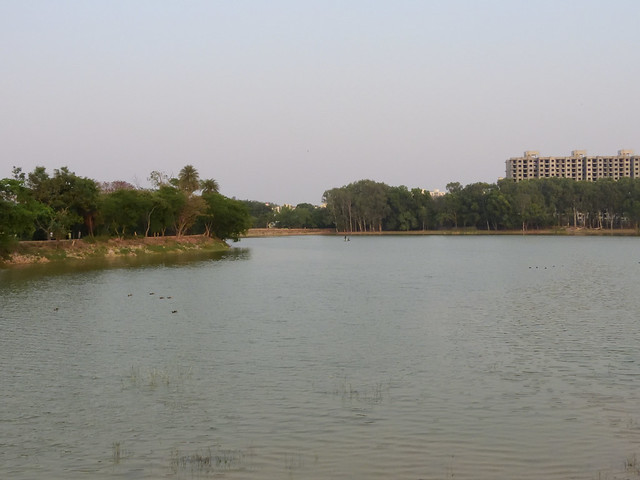 There is a small island in the middle of the lake and that would house painted storks or Asian open bills. This lake is also rich in Pied King fishers. If you patiently wait you will be lucky enough to see these beautiful creatures hovering over the lake and plunging in to the water and coming up with a fish. 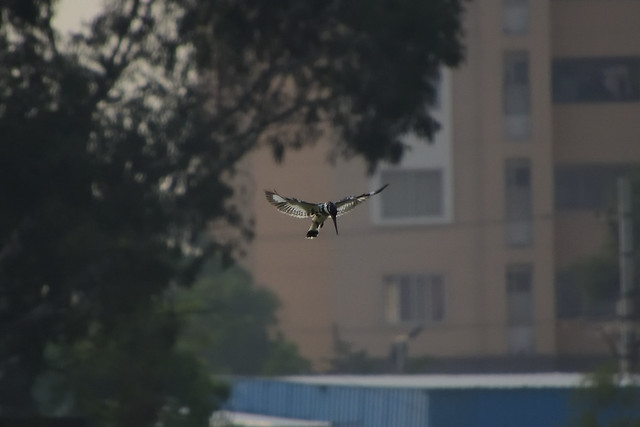 I waited there for almost 30 mins enjoying this view.

For a complete bird list and Photos visit the links below.