It was the first day of a long weekend. While most of Bangalore was still slumbering, my wife and I had packed our bags and by 4AM we had hit the roads. This time our destination was a small hamlet somewhere in the State of Andhra Pradesh called Gandikotta. Known as ‘The Grand Canyon of India’, this place is still in its pristine form, not many tourists have started flocking in to see this natural marvel. This was almost a 300 Km ride so we decided to stop by at Belum Caves in Kadappa district.

Even with the summer at its peak, a bike ride very early in the morning in Karnataka, is still very chilly. Almost an hour into the ride with my gloves and Jacket on, I was still shivering, Every passing minute I was dying for the sun to rise so that I could bask in the warm rays. By the time the Sun was at the horizon we had reached Le Pakshi. For people planning a visit to Gandikota from Bangalore I would suggest they cover, Le Pakshi, Belum Caves and Gandikota in a single trip.

Following Google maps we had to leave the Highway and soon the roads turned into narrow roads. At the horizon I could see chimneys of  a large factory, that explained the dust. We had reached Kadappa, A place famous for its granite stones. In every corner we could see slabs of stones piled up, some places the entire walls were made up of such stacks of granite slabs. There was a beauty to that symmetrical arrangement. It seemed as if some one with OCD had gone around town stacking every available slab of stone. Such views continued for almost half and hour and then at a distance we could see a white statue of Lord Buddha, we were almost certain that, that was our Belum caves. We reached just in time or rather before time. The ticket counters were just opening and a few of the staff had gone down the caves just to make sure it was safe for the tourists to go down the caves. We quickly grabbed a coffee from the APTDC canteen nearby. We were ready to explore the second largest underground caves in India.

Belum caves is an underground cave system that has been formed naturally. The place was discovered in 1884 by British surveyor and later by a German speleologist  H. Daniel Gebauer explored the caves, there hall at the entrance into the caves is named after Daniel Gebauer. Being a dark and dingy place the cave is home to a decent number of bats. If you ever intend to take photos of this place do not even bother wasting your time and effort unless you have a tripod. The whole cave system is lit with dim lights and strips of LED. The dim lights infact add to the ambiance of the whole place. It was humid and we had started sweating.

Since there were only very few people, I got enough space to calmly explore the whole structure. From the information I gathered about 3.5Km of the  caves have been explored but only around 1Km is open for public access. As we went further deeper the pathways became narrower. 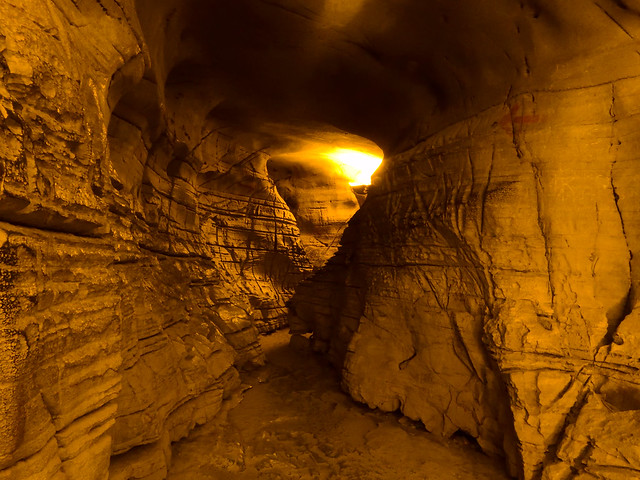 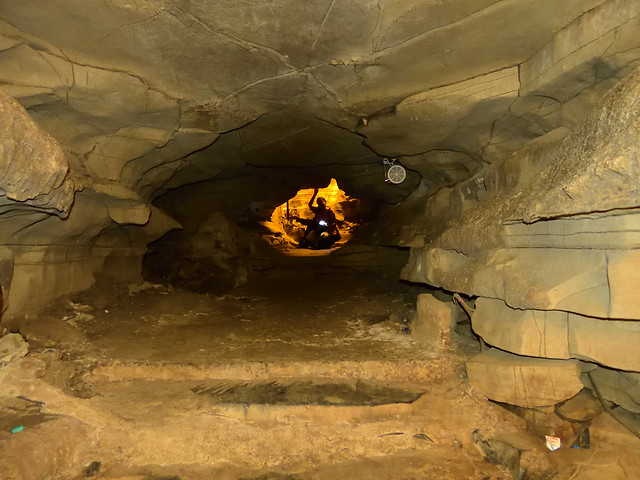 We went on until we reached Patala Ganga the deepest point in the cave system.

After that exhausting journey we grabbed some lunch from the ‘Haritha’ restaurant by APTDC. A word of caution to fellow travelers, the entire route does not have any good place to eat, so it is advisable to carry food and water with you.

We still had to cover a distance of 60Kms to reach Gandikotta. We left Belum caves with our minds still wondering how the caves would have been formed and if it indeed was a natural formation how mother nature does these tricks.

The final 20 Kms of this journey was through a barren land, you can see the entire landscape and there was no sign of any hotel or resort. At this point the sun was at its peak and the Andhra summer is not something for the faint hearted.

But I should admit that even barren land had a beauty of its own,unlike the concrete buildings of Bangalore. Except for the heat I was enjoying everything else on the way, and then suddenly out of nowhere we see some flags fluttering and on it the APTDC symbol. The whole place looked like a palace from a fairy tale.

Both of us where completely exhausted quickly checked in had a second round of lunch and had a power nap. ‘Haritha’ run by the Andhra Pradesh Tourism department is the only hotel available in almost 70Km radius of this area. I was pleasantly surprised that although this is a government run hotel, still it had some pretty decent standards and the service was amazing. The only downfall is that the staff speak only Telugu, a few of them can understand English or Tamil. We managed with English, these folks are so cooperative and dedicated that soon the language will not be a barrier. Our room boy told us that we should head to the Juma Masjid which was half a kilometer from the hotel for a sunset view.

We drove through the Gandikota fort and on the other side were a couple of small houses which was still inhabited by farmers. The road led us straight to the Juma Masjid. We went around the place. There were a couple,of tourists scattered here and there but the whole atmosphere was calm and peaceful.

A few minutes walk from the Juma Masjid will take you to a breath taking view of Penna River flowing in between two cliffs. 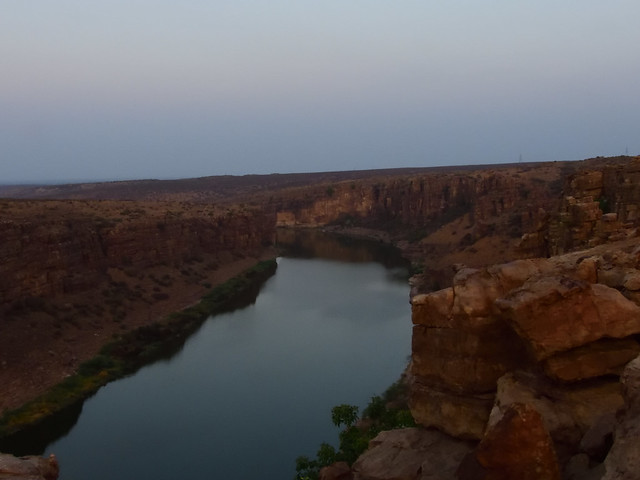 From the day I had been planning this trip I was skeptical whether Penna river would still have water flowing in this summer. But those doubts soon vanished. We climbed up some of those rocks to get a good view of this magnificent river and the path that it had cut out for itself over the millenniums. The sun was slowly setting behind us. It felt as if the sun was also peeping from behind us to get one last glimpse of the Penna River before it went down. Soon after sunset we headed back to our room to enjoy the hospitality offered by APTDC.