It was peak summer time in Kerala, but I was determined to check out one item from my Bucket list and that was to witness ‘Thrissur Pooram’ in all its glory. Our Journey this time was on the chariots of Indian Railways. For an overnight journey I believe trains are the best option if you are in India. You get food sleep and a comparatively safer journey. The journey began on the evening of 3rd May. Next day early morning we stepped out from the comfort of the AC coach of the train onto the hot and humid platform of Thrissur railway station. But this discomfort was short lived. From the day I landed in Thrissur I had decided that I will reserve a few lines in my blog post for the good natured people of this beautiful town in God’s Own Country.

Unlike other major cities and towns in India I have found the people of Thrissur more polite, and tolerant towards outsiders. Right from the auto rikshaw and taxi drivers to the road side vendors are people willing to help and guide you. We took an Auto from the railway station to our hotel. The driver was kind enough to give us a quick tour of the city and informed us of the major attractions there and what timings were apt for each place. At the end of the journey he charged us a fee which I felt was reasonable (this happens rarely in Kerala as taxi and auto drivers never miss and opportunity to loot you). He even gave a breakup and an explanation of how the rates were decided.

Soon after freshening up we decided not to waste a single minute. The next action item was to visit the ‘Vadakumnatha Temple’ and then have an authentic Kerala breakfast. We took a bus from our hotel to the temple, it was a short fifteen minute journey with the loud devotional songs typically played in these kind of small private buses in Kerala. You will have a conductor with a whistle in his mouth leaning at the doorstep of the bus swaying with every rash turn the driver takes, which will throw some passengers off their feet, who were not fortunate enough to get a seat. These buses are the lifeline of many villages and towns of Kerala and for people who are willing to be a bit ‘adventurous’ this can get you to a place in time without burning a hole in your pocket.

The bus had a stop right in front of the temple. 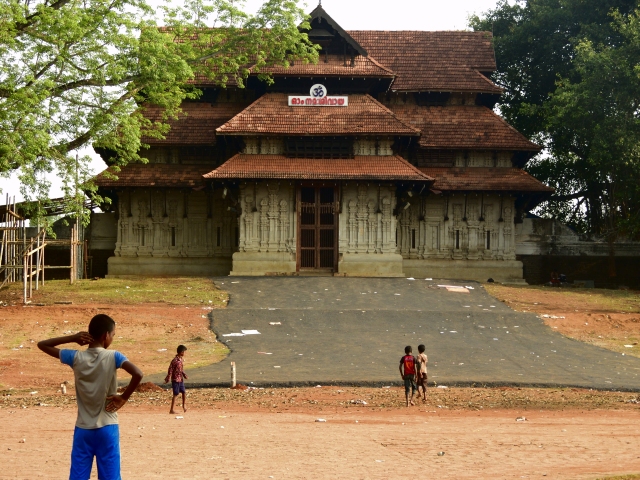 It looked very calm and quite. We saw people putting up bamboo structures that would serve as support for platforms for the media to cover the event. There were some smaller structures also, which were meant for the street vendors. We saw a couple of stalls being setup. Without wasting much time we went into the temple. This is by far the largest temple compound I have ever seen in Kerala. Legend says that this temple was built by lord Parasurama to atone for the sins of killing Kshatriyas. There are many stories associated with this temple. Since I am no expert on legends and folklore , it is better that my readers obtain these information from the right sources. But one thing that I can say for sure is that this is a marvel, it boasts the skill and craftsmanship of the architects of Kerala. The area around the temple once used to be a teak plantation which was cleared by Shaktan Tampuran to conduct the Thrissur Pooram. The place is still called ‘Thekinkadu’ which translates to forest of teaks.

After a stroll through the rich history of the temple we went on to have breakfast in one of the nearby hotels, since it was still early in the morning we had limited options. After this we roamed around the city for some more time.

The major attractions of the Pooram are the processions by the constituent temples, the Elanjithara melam, Kudamattom, and the fireworks display.  The 10 temples split themselves into two groups- some side with the Paramekavu Bhagavathy temple and the others with the Thiruvambadi Sri Krishna temple. The rest of the activities are like a competition between the two sides. Its an opportunity for both sides to show off the unity and determination of their devotees in making the Pooram a huge success.

One of the major attractions of the pooram is the ‘Kudamattom’ where beautifully colored and decorated parasols are displayed. On the day before the pooram both teams put the parasols for public display. This is called the ‘Chamaya Pradarshanam’ which means display of decorations.

The next day again we reached Thrissur town in the morning. Processions from the constituent temples had started, the roads were free of Motor vehicles and Elephants had taken their place. Huge male elephants with long tusks and decorations carrying the idols of the temples. Though the whole setup looks magnificient, I felt pity to these large animals who seemed to be undergoing discomfort and were in great pain standing on the hot road under a burning sun with a large load on its back.

These processions continued throughout the first half of the day. The famous Elanjithara melam that happens inside the temple compound started at around 3PM. We were just lucky enough to gain entry into the temple. The crowd was so large that at some point I even gave up the hope of getting in.

I do not have words to describe the grandeur I saw there, the joy and excitement I saw on every face on that street. There were people from different parts of the world, from different walks of life. I was glad to be a part of the Pooram. I was impressed by the way the organisers of the Pooram were able to coordinate so many aspects. The way the Police, the people and the tourists cooperated to make this the largest temple festival in Kerala. I cannot claim to have witnessed the entire Pooram, I am yet to witness the Fireworks display. Afterall whats the fun if you finish off everything in one go its always good to leave something behind for later. Because that will serve as a motivation to come back again. 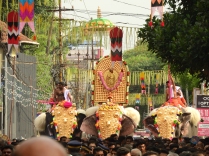 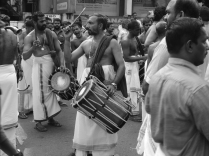 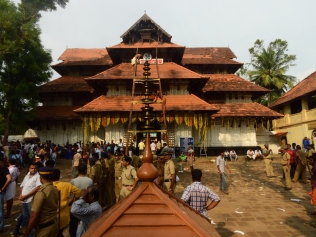 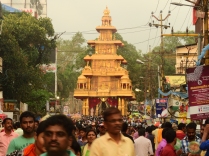 2 thoughts on “In God’s Own country, at the People’s own festival – Thrissur Pooram”