On the 7th of May 2017, I woke up to the morning rays hitting me through the windows of an Airplane. I looked down and saw waves, brown in color and not the usual shades of blue. It took me a few seconds to realize that I was looking at the sand dunes and not the ocean. I was flying over the Arabian deserts to one of the marvels created by Man – The City of Dubai.

In the last 27 years of my existence on this planet I have never seen a desert and all I know about it is from the books, photos or videos that I have seen. The picture painted by all these media were quite dull and melancholic. Those sand dune patterns looked as if some one had painstakingly arranged them to form wavy pattern there was a symmetry and the contours were almost parallel.

As soon as we landed in Dubai the entire landscape had changed. The brown sand dunes gave way to skyscrapers made of steel and glass. The suns reflection was glaring from each of those glass panes making them even brighter. I was travelling with my family and my uncle was there with his friend to receive us at the airport. Unlike my usual trips the next seven days of this trip was well planned and charted, thanks to my uncle and his friend, Mr. Nawas. Being the beginning of summer ‘Arabian Days’ were hot. So all our activities were planned for the evenings and from the information I gathered that’s when the city of Dubai really comes to life.

During lunch time I realized that although I had crossed one sea and a couple of international borders, I was not going to miss Kerala cuisine. Dubai had more Kerala cuisine hotels than the Arabian ones. After lunch we set of to see the Dubai mall and the aquarium that spanned over three floors of the mall. All those creatures in an artificially created habitat miles away from their real habitats. Although I despise such places, it made me think about the educational value such places hold. It is one way of educating the younger generations on the wide variety of life forms that share this planet with us.

After spending almost 2 hours in the aquarium, we were all mesmerized by myriad life forms under the sea. The surprises for the day was still not over, next we headed to the Dubai Miracle Garden.

This was a real ‘Wonder’ for me, how on earth could all these flowers remain so fresh and colorful, in the scorching heat of Dubai. I should admit that I have never seen such a well maintained garden, ever. And the fact that this is located in the one of the most water scarce landscapes on earth adds to the beauty of the place.

We walked through the garden and by then it was dinner time and we headed back. We all went back to the hotel tired but exited about the days ahead.

The next day everyone woke up at lunch time and post lunch we were all geared up for Day 2 of Dubai. This time we headed to the Dubai Marina we took a boat trip around the Palm Jumeirah. I witnessed one of the most breathtaking view of the sunset. The sky was painted Orange and setting seemed magical from that boat. 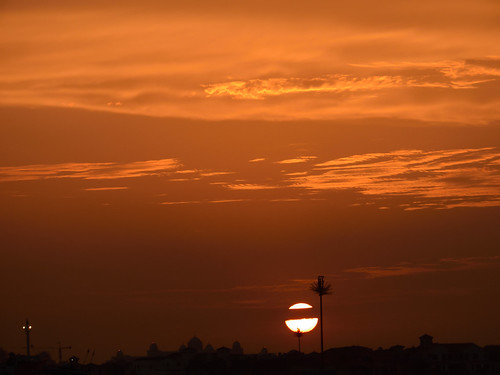 Day 3 was the best of all. We were to witness the real Dubai. The desert safari was the most awaited event of the trip. We were instructed not to have a heavy lunch as the ride was going to be bumpy and there would be amazing food at the end of the ride for which we had to keep a good appetite.
Our guide was Mr. Allah Baksh, a fine gentleman from Pakistan who could speak malayalam. He was a very good host and kept us entertained through out the evening. We started off around 2:30pm and soon the city landscape gave way to the barren desert land, with a couple of Palm tree plantations on the way. We stopped at one of the highway supermarkets to freshen up. Due to the immense pressure from my cousins we stopped at a Quad biking place and spent half an hour driving those crazy machines in the sand. Most of the time we would either bump into each other or get stuck in the sand ricocheting sand onto whoever was behind us. We then headed for the sand bashing. Mr Baksh expalined to us how the tyre pressure of the vehicle had to be reduced to almost 50% to drive through the sand dunes. The next 1 hour of the ride was like a roller coaster. And there was nothing but sand visible in all four directions as far as our eyes could see. We stopped on the way to click some photos.

We then went onto one of the camp sites where food and the shows for the night were arranged. It was an awesome evening with a blend of food, adventure and tradition. The ‘Tanoura’ a traditional Sufi dance where the performer continuously keeps spinning to a psychedelic music, was mesmerizing to witness.

The next day was the set aside for Burj Khalifa. A Dubai trip would not be complete if you have not seen the Burj Khalifa. It is truly a remarkable feat that the Dubai Government achieved when it constructed the tallest standing man-made structure. But while on our way back from Burj Khalifa we happened to pass in front of the Ras AlKhor Wildlife sanctuary. I saw a flock of birds and in a split second I realized that I was looking at the ‘Lesser Flamingoes’. There was no way I was going to leave Dubai without clicking a few shots.

We then went on to visit the LED glow garden, another man made spectacle. The whole place was decorated with colored lights and there was a Dinosaur park, with Dinosaur models that looked real-life. They even mimicked the movements of a live creature. The attention to detail given by the architects of the Dinosaur park is truly remarkable.

Day 5 was less hectic as we spent a day at Dragon Mart, the largest Chinese bazaar in Dubai. We had dinner cruise in Dubai Marina. The Dubai skyline looked really wonderful with the Burj Khalifa standing as an odd one out. 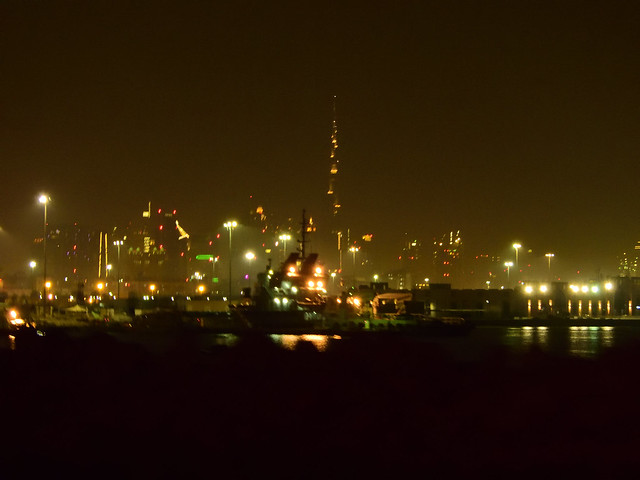 On day 6 we left early in the morning for Abu Dhabi. We spent an entire day at the Ferrari world, A Ferrari branded theme park, It had some amazing and thrilling rides. This park houses the fastest roller coaster in the world. It was almost 5-6hrs of pure fun and adrenaline rush.

We then went to visit the The Sheikh Zayed Grand Mosque. The carpet in the main prayer hall is considered to be the world’s largest carpet. The chandeliers in the mosque have been imported from Germany. 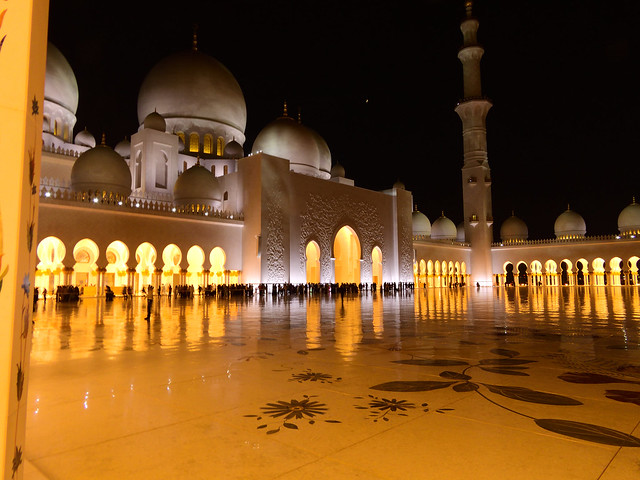 The sheer will power of the rulers of a barren land has transformed it from a desert to marvel. There is nothing that you will not find in Dubai, they have artificially created natural habitats for animals and they have created modern technological wonders as well. The entire city and the sights there are truly miraculous, they seem like a tale from the Arabian Nights.