It was a fine Sunday morning. The past week Bangalore witnessed intermittent spells of rains and the the days were overcast and gloomy. In the past few weeks some of my birding trips to the lake was cut short by spells of rain.

Today was different. There was a cool breeze and the sun was fighting vehemently with the clouds. The sky looked like a battle ground with the Sun piercing through the clouds and making its way to the beautiful waters of the lake. As the rays touched the water it shimmered like diamonds. Pelicans  swam across this water scooping in to catch fish. Herons stood in meditation, as if they were also thanking the Sun god for shining upon them. Swamp hens were pecking around searching for something they lost. The cattle grazed lazily whilst there shepherds sat under on the  ground basking in the warmth of the sun and  puffing a beedi and occasionally accompanied by a dog that would bark at anyone passing by.  There was a lapwing calling out in the distant.

Drongos and Shrikes were performing their acrobatics. Each time it flew to the ground it picked up something went to a nearby perch to gulp in the morning catch. A bee eater was perched on a nearby tree, and in  a swift movement it spread its wings  and tails, shot up like a  missile and returned to the same perch with a dragonfly between its beaks. Larks kept shooting out from the low bushes, it was a beautiful sight to see them glide effortlessly back to where they launched from.

But I was on the look out for the Baya Weaver. This is the breeding season for the weavers and on my previous visits I had seen the weavers cousins – the Indian Silver bills, tri-colored munias  and even the scaly breasted munias. The weavers are not a rare species but its just that I have not been fortunate to see them during the breeding season.

My usual walk starts near the farm fields near one end of the lake and then I keep walking  to the other end and back. I had walked for almost an hour and had almost lost hope of spotting the weaver, when I suddenly saw a weaver’s nest hanging at a distant. This brought my hopes back and I was also cautious so as not to disturb the birds during their breeding season. I walked past the tree and found a wonderful spot at a safe distant from where I could see the nest and its weavers. It seemed as if the nest was still being built as I could see a male Baya weaver weaving the nest. The females gave occasional visits as if inspecting the quality. They would fly in through the bottom opening of the nest and after a few seconds would come out and hover around the nest. Sometimes they would hover around the entrance, as if they were wondering whether to go in or not. Another male weaver happened to drop by the nest, but was immediately chased away by the first bird. Watching these birds gave me an immense sense of gratification. I had spend quite some time watching these birds and I failed to notice that the Sun had lost the battle to the clouds and the sky was overcast. And just when I was about to pack up and leave, a cool breeze blew caressing the tall grass around me. Like a shower of flowers falling from the skies a flock of Red Avadavats flew and perched on the grass and bushes around me. wept across the tall grass around me. I was pleasantly surprised by what was being offered to me after several weeks of disappointing birding trips. The lighting was not good enough for a clean and clear shot but, I wanted to capture this record moment. And as I was aiming my camera the Sun shone brightly for a moment, giving me a window short but long enough to get one shot of the bird. 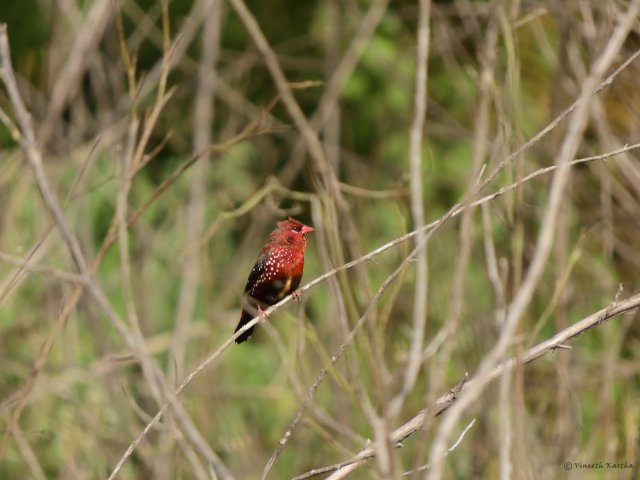