Travel is one of the greatest stress busters, that I have ever experienced and that too there is nothing like a trip out into the wild. My wife and I never missed an opportunity to travel until our little angel arrived in 2018. Since then we were on a break from travel and was patiently waiting for the day when she will be ready for adventure. Finally we decided to get back on the roads. Our destination, the Bheemeshwari Jungle Lodges and Resorts’ adventure and nature camp, on the banks of river Kaveri.

We started of from our home in Bengaluru at around 7:30am on a Saturday morning. We had a reservation made at the Jungle lodges and our check in time was 12PM. This meant we had plenty of time to reach. The drive from Bengaluru to Bheemeshwari was a 3 hr drive with approx 130Km to cover. We took the Nice road and then from there hit the Mysore road. Google Maps was trying to re-route us through the Kanakpura road as that was a shorter route.
But having traveled on Kanakpura road in the past, I preferred the Mysore road as that had more options for a pit stop.

We stopped for Breakfast at A2B in Bidadi, which was our regular breakfast spot for all our travels on this route. After a quick breakfast we moved on. From Chanapatna we took a left turn towards Malavalli. From there we simply followed Google Maps.

The villages in Karnataka have a special charm. They are the typical Indian villages from R.K Narayan’s writings. A small lane with small houses on both sides, with open drains running in front of the house. The houses themselves had a homely feeling. The houses are made of brick and cement, but yet their structures are quite interesting. Small houses with a verandah in the front. The roof supported by two pillars.There will be a main door and a window on each side.

We passed several such villages. The village center will be a bazaar with a bus stop and with vendors selling all kinds of fruits, vegetables flowers and other items.

After one such village we saw the entrance to Kaveri wild life sanctuary. There were two guards and we had to make an entry in the register before we proceeded. There was a govt. bus in front of us and we had to wait until the guards finished inspecting the bus.
This sanctuary does not have safaris and hence there are very few tourists that visit this place. The activities provided by the Jungle Lodges are the only attraction over here.

The Jungle Lodges was 6 kms from the sanctuary entry gate. By now my daughter had woken up. She had slept for almost the entire duration of the drive. In anticipation of seeing some wild life, I drove slowly. The road was full of monkeys which amused my daughter. We could see people from the bus in front of us throwing food to the monkeys. Ironically there were boards every few yards with a warning that feeding the wild animals was a punishable offense and so was littering the place.

We were received at the jungle lodges by Muthaiyya, a Jungle lodges staff and our guide. We were escorted to the Manager’s office for a briefing about the rules of the sanctuary and for other formalities of our stay. The entrance to the Manager’s office had a small garden which was full of Red Pierrots and Crimson Roses. I wanted to pull out my camera and sit there for the whole day. Soon after, we were allotted our tented cottage and were served with a very refreshing lemonade. 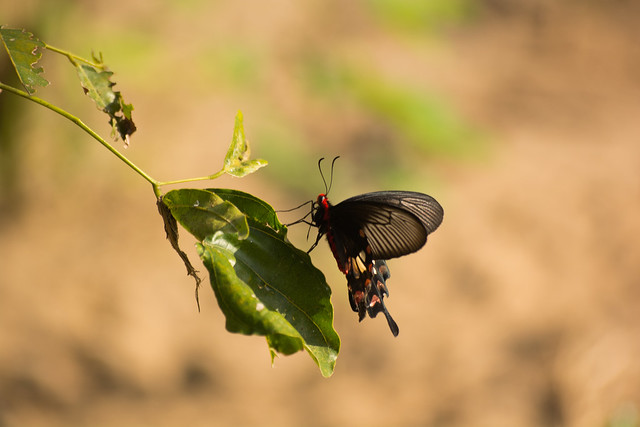 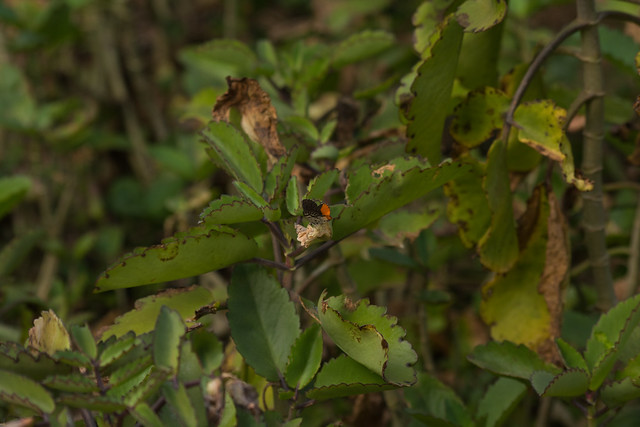 After settling in, we took a walk around the camp. It was an area sprawling with trees. There were information boards at random locations, explaining various flora and fauna found in the place. We had to walk to reach the dining hall which was located close to the banks of river Kaveri. The lunch was sumptuous with a very beautiful view of the Kaveri. Soon after lunch our activities were to start.

The first set included some adventure sports like Burma loops, parallel walk, zip lining and that sort of things. This was followed by a coracle ride. Which I found more interesting. Coincidentally our boatsman was also called Muthaiyya. He was showing us the forest and how high the water gets during the monsoons. He did an amazing job of giving an interesting conversation.

I was watching the river terns that were flying all around the place. Every few minutes there were formations of cormorants that flew over head. The Kingfishers and lapwings were calling in rhythm. Occasionally a darter would also fly by.

And then Muthaiyya started pointing to a rock at a distance. I tried to follow the direction in which his fingers were pointed but all I could see was rocks. He started rowing closer and still all I could see was grey colored rocks with lichen on them. And then as we got closer a part of the ‘rock’ started moving and it is then that we realised that Muthaiyya was pointing at a crocodile.

I cursed my fate for not having carried the right lens. All I was expecting was a scenic ride in the river and hence all I had was a wide angle lens. Soon after there was another movement and that was a second crocodile.
It is quite fascinating to see true camouflage at work. And it was even more impressive how Muthaiyya was able to spot them even from a distance.

I also happened to see a Fish Eagle fly onto a tree. I lost site of it after that. After our coracle ride, the next item on the list was Kayaking. Now this was a two man kayak and we decided to drop it out as we could not carry our daughter with us. But then Muthaiyya told us to try out everything and that we could go one by one. So I took the first turn. There was one life guard along with me. On the Kayak, the area we could visit was restricted and I believe it is the crocodiles that were the reason. 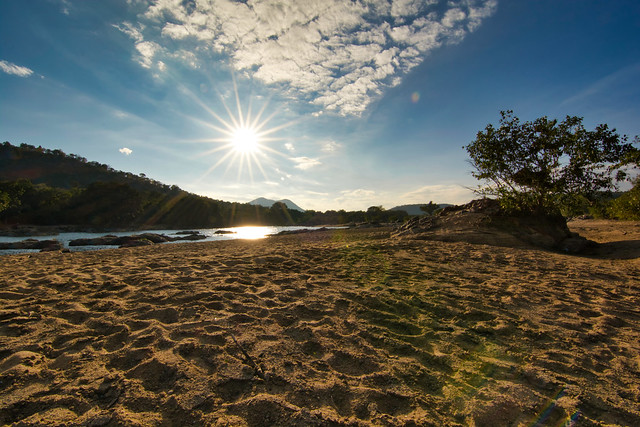 After the kayaking we took a stroll along the banks. The sun was setting and there was a breeze. It just felt so good to walk there. There were a few other guests who were going on about their activities. We made way back to our cottage. I spent some more time capturing the scenes around the river and hoping to see a few more birds in the area. It was getting dark soon and I went back to freshen up for dinner. When we came out it was pitch dark except for the small lights that were along the walk ways to the dinner hall.

As soon as we passed the canopy of the trees surrounding our cottage. I looked up into the sky. The view was so breathtaking that even my daughter who was restless till then calmed down for a couple of minutes until she started singing ‘Twinkle Twinkle little star’. She was so ecstatic that a few of the guests who were passing by also stopped to see what the whole commotion was about. I went back and brought my camera gear to try my best to capture the sky. Because such a moment comes only rarely and for city dwellers like us, seeing a clear night sky is nothing but a dream come true.
By the time I returned I realized that the frogs in the puddles of water nearby had taken up where my daughter had left the song. As the night sky revealed, more and more with the symphony of the frogs and crickets. It seemed as if the stars were dancing in tune to that symphony. What a better way to end the day. 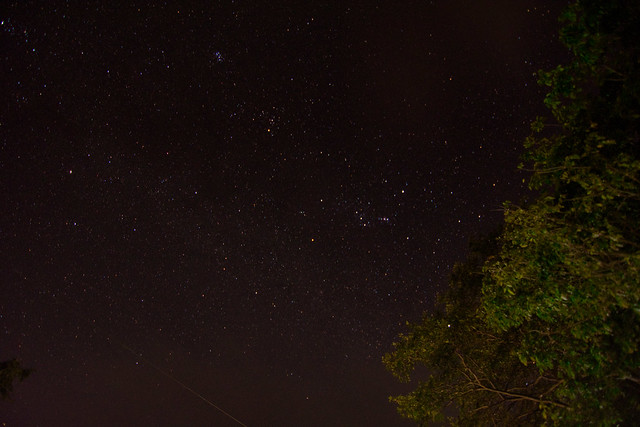 The next day morning I got up early. We were told that there would be a wake up call at around 6AM and then there would be a trek to a nearby hill by 7AM. I was up by 5 in the morning, excited about the events that were to unfold and mainly because the excitement from the previous day.

By 7AM Muthaiyya our guide who had welcomed us at the camp, came to our cottage and we started on the trek. We started walking towards the main gate of the camp and then out. The roads were empty. The monkeys we had seen on the previous day were not there. Maybe it was too early for them. We followed Muthaiyya as he took a detour from the main road and walked into the shrubs. There were several pairs of gray hornbills flying around. Bulbuls, parakeets, bee-eaters all the usuals were going on about their daily chores. The path started getting steeper and I had to put my camera away and carry my daughter. It was not a difficult trek but carrying my camera gear and my daughter and the fact that I am not in my best shape(never have been), it seemed like a really tough trek. We forgot to carry water and thankfully the sun was still not beating down on us. 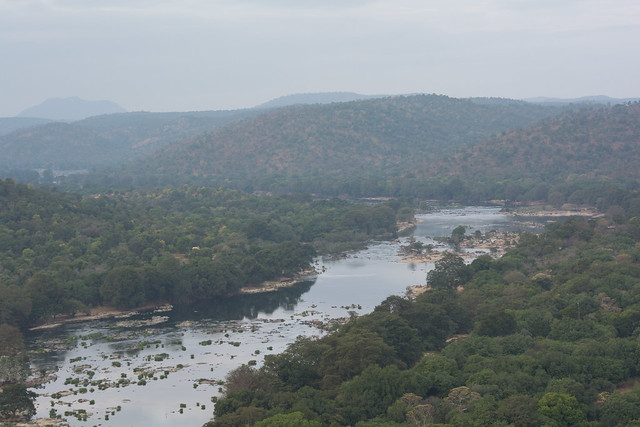 We had to leave the place not because we wanted to but because we had to make space for the other guests as well and due to the fact that we had to checkout soon after this. We started our descend back. All the time while I was climbing my worry was about how I will descend this peak carrying my daughter because the path was very steep with very little to hold on to.

But Muthaiyya had an alternate route which was a bit longer but had a very gentle descend. All the while I was wondering why we had not taken this path while climbing. We started hearing langur calls at a distance. We saw wild boars running parallel to us in the bushes. We reached the main road and were relaxing a bit. I was making a checklist of all the birds I had seen on the way, which were not many. I should say that I was a bit disappointed at not having spotted any serious wildlife.
As we were about to reach the gates of the camp, Muthaiyya pointer his stick to the tall grass on the other side of the road. I could see something moving and was not sure on what I was seeing, and then from the grass it came out in the open, It was an Indian Jackal. The jungles in Bheemeshwari are known for the Indian Jackal population. It was interesting to meet the most talented trickster of the Indian jungles as per the folklore. 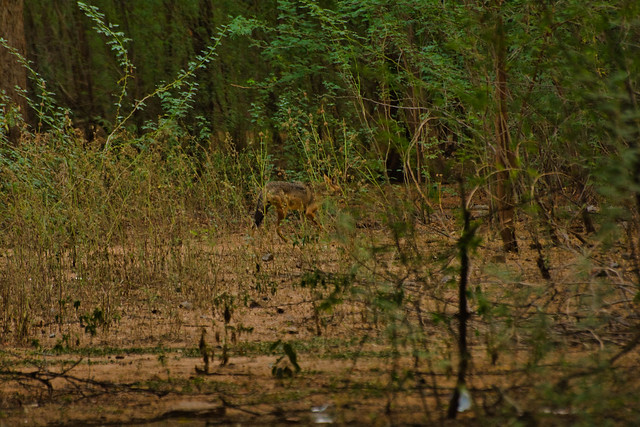 As I struggled to setup my camera back and get a shot, this guy had disappeared back into the grasses. We soon returned back and thanked Muthaiyya for that wonderful trek. All good things must come to an end and so was the case with our trip to Bheemeshwari. But we left the place content and happy.