← A weekend on the banks of Kaveri

The Queen of Thirunelli

As I slid into the driver’s seat at 4:30 in the morning, I could not believe that we are finally on our way to Wayanad. A month back we had started
planning for this trip and 2 weeks back our chances of making this trip seemed so slim. Hectic work schedules and us falling sick had dampened our spirits. But finally, here I was driving through the city and towards Wayanad. This was our fourth visit to Jungle Retreat at Thirunelli. Every visit to this beautiful place had given us memories to cherish for a lifetime. I believe it was a visit to Jungle Retreat in 2016, that brought me closer to nature and the Indian Jungles.

After a quick breakfast from a restaurant near Srirangapatna, we continued towards Nagarhole. We were stopped at the Nagarhole entry for the usual formalities Once we enter the gates we have to exit at the other side within an hour. I handed over the wheels to my brother-in-law. I pulled out my camera and waited in anticipation. It was around 10:30 in the morning and with the hot sun above our heads, chances of any sightings were slim. Despite the heat and the reports regarding the meagre monsoons, Nagarhole looked green. It was a treat to the eyes to see the different shades of green on both sides of the road. And intermittently there would be a tree mostly with shades of red, that will stand as the odd one out. Those trees, of which I do not know the name, looked like the work of some master artist. 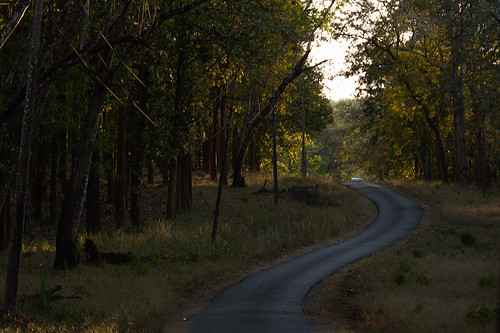 We soon checked into the Jungle retreat and on our way to the room, a small creature caught our attention. It looked like a squirrel and if this incident had happened a few years back, I would have walked on without taking a second look. But over the last couple of years, I developed a curiosity towards nature. I have learned not to underestimate any creature that I come across. And that curiosity has paid off on several of my trips. And today at the Jungle retreat I saw one of the most elusive animals of the Indian jungle – a mouse deer. These are tiny shy creatures and on several of my previous trips, I have heard several naturalists speak about this amazing creature.

We had started early in the morning and everyone was a bit tired after the long drive. My daughter who had slept for the entire duration of the drive was fully rested and was ready to explore. As we were proceeding to the dining area Manu had just come back from a trek with several other guests. We had a lot of catch up to do but the first thing he said as soon as he saw me was that they have been seeing the tiger for the past 11
days during their return trip from the campfire and he was so
optimistic that we might see Snow white and her cubs today as well.

With our hopes rejuvenated by Manu’s words and our spirits rekindled by the tasty food that was being served, we enjoyed our welcome at the Jungle Retreat. Soon after, we left for Nagarhole for our evening safari. The next two hours was one of the most disappointing experiences I have ever had in Nagarhole or any other wildlife sanctuary so far. We had a driver who did not know anything about the jungles. He just drove around the game tracks without ever stopping unless we requested him to stop. Neither did he show interest in showing us anything. 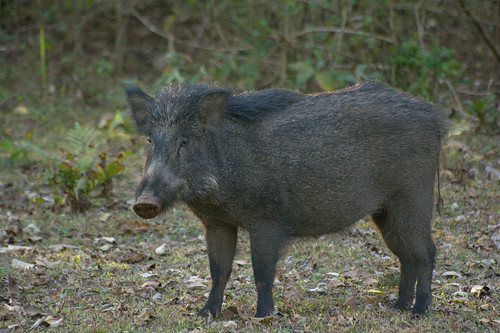 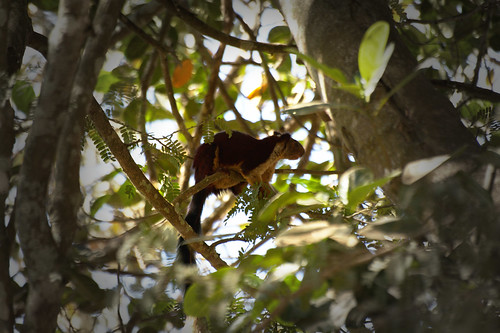 I wish not to waste words or space on my blog about those two hours. Soon after we went back to our rooms, freshened up and went for the campfire, which was a few kilometres away from the resort.

The campfire experience in Jungle retreats is something worth mentioning. We left the resort compound and drove towards farmland that is on the banks of a stream. The other side of the stream is a Jungle. There is a small area by the stream where our hosts had arranged a few stones to sit on and a small circle in the centre to light the fire. The main star of the campfire is ‘Chathettan’ a local tribal man from that area. He comes with a tomato soup that he warms up on the bonfire and then we also get a serving of tapioca with a chutney that is made of onions, green chilies, and salt. It is amazing to see the magic that ‘Chathettan’ does with these simple ingredients. And in the darkness of the night with just the bonfire providing light, ‘Chathettan’ looks like a wizard brewing magic potions. 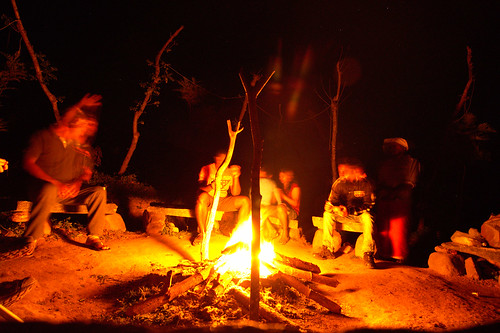 Picture this, sitting under a starlit sky, by a gently flowing stream. A cool breeze that blows carrying with it the smell of the Jungle, crickets, and frogs croaking in the background and a fire to keep you warm. I don’t think anything else in the world can relieve my stress the way this can.
After almost an hour of chit-chatting around the fire and listening to Manu’s stories around the campfire, we headed back. Unlike the promise that Manu had made nothing happened on our drive back to the resort. We drove slowly keeping watch for the tiniest of the movements on both sides of the road. The closer we got to the resort the more dissapointed I got.  I tried to convince myself that, the mouse deer sighting from the morning was worth more than a tiger sighting. But deep down I really wanted to see snow white.

The dinner was again delicious. With our stomachs full and hearts empty we decided to call it a day and went to bed.

I could not get myself to sleep so I went out on the balcony of our room and I was enjoying the cool breeze and the starry night. Have you heard the saying that ‘silence is deafening’, well the silence in the jungle can be scary as well. I would have spend a good 20 minutes out on the balcony before my mind started playing tricks on me. I started hearing all kinds of eerie sounds nearby.
The trees seemed to be moving, They might have been talking to each other I am not sure. I could hear an elephant trumpeting somewhere nearby. Well, that was all I could take for one night and I decided to go back and force myself to sleep.

The next day I got up early as Manu and I had decided to go for a bird walk. So we stepped outside the compound wall of the resort and started walking towards the Jungle. Manu saw elephant dung on our way and he said “It looks like this is from yesterday night. Anil sir mentioned that he did hear elephants at night.” We moved into the Jungle and found a sweet spot on a rock. We waited there for a good one hour. In that one hour, we were entertained by the show of a golden fronted leaf bird pair. A Malabar grey hornbill that came to gather food for its family that might have been waiting on a tree far off from human sight. We had Malabar barbets and chestnut tailed starlings, fighting for the same perch on the tree. Minivets were flashing there bright orange colors. 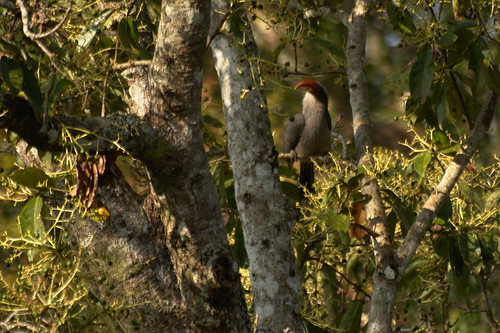 By the time I came back, my folks had gone to the Tiruneli temple. They were supposed to be back by 10 AM because that is when we go for the ‘Jungle Trek’.
It was 10:30 AM when every other guest was ready for the trek and my wife had not returned. I knew that I would be walking into my death if I decided to go ahead without her.
Anyway, I decided to go. We started with the same route that Manu and I took in the morning. We walked past the water hole near the resort. So before we started the trek, Manu had informed us that 2 days back there was a kill located near the resort. So there is a high possibility that Snow White might be guarding that kill. So we were at all costs to avoid that part of the jungle. Instead, we would go around the property close to the property’s border and come back.
Once we crossed the open field. We literally had to walk through thick lantana bushes. I realized that pulling my camera out might not be the brightest idea and instead I kept my binoculars close. The forest floor was littered with dry teak leaves and with 8 of us walking on those dry leaves any animal in a 1-mile radius would have fled. Occasionally Manu would stop to check if there were any signs of elephants. Out of nowhere suddenly we saw two black eagles circling an area. Manu confirmed that it was there that the dead carcass of Snow Whites feast was lying and as per the plan we were to avoid that area. And we did avoid that area. After all, no one wants to walk into a tiger who has cubs and is guarding her kill. Soon we were walking behind the Jungle Villa and I could hear my wife talking. On any other day, I would have been happy to hear her voice, but at that particular moment, it reminded me of my impending doom once I reach back. So far we had nothing interesting that happened during the trek and I was hoping that I could use that to my advantage to convince her she had not missed on anything. While I was thinking about how I was going to save my ass, Manu stopped all of a sudden and pointed into the bushes. What happened for the next few seconds I do not know and I do not know how to describe what I felt.
All I remember is seeing an orange surface with black stripes on it. The few folks who were just behind had taken a 180-degree turn and had started walking back. A few skeptics in the group wanted to see before they turned back, and then there was me, very slowly pulling out my binocular and focusing in on the cat that was lying maybe a 100 meters in front of me. I remember Manu trying to convince us all to turn and walk back.

By the time I regained my senses, I could only think about what Jim Corbet had written about tigers in his stories. “The tiger indeed is a large-hearted gentleman”.

PS: If any of my readers feel that this is an over-hyped narration, you are free to believe so. But for the other 7 folks who were on the trek, they know the truth.

Hi, I am Vineeth Kartha, I hold a Masters degree in Embedded Systems from BITS Pilani, Goa Campus. I currently work as a Software Developer. I am A free software promoter and electronics hobbyist. In my free time I do a little bit of birding and Wildlife photography. I love travelling, reading and blogging.
View all posts by vineethkartha »

Posted on March 8, 2020, in Travel. Bookmark the permalink. Leave a comment.

← A weekend on the banks of Kaveri